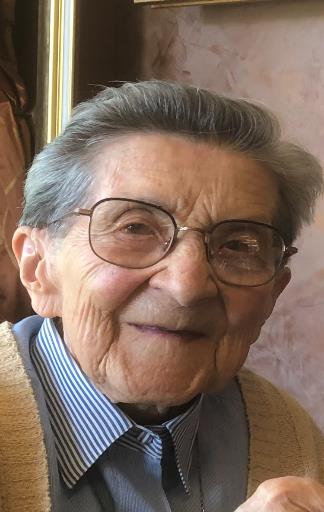 Marie-Thérèse Mangin was born on 21st April 1925 at Brû, a little village in the Vosges. She was the third of four children.
Her father died when she was 4. She went to school at Notre-Dame in Epinal, then to the University of Nancy, where she read French Literature until 1946, then Classical Literature. In 1949 she entered the noviciate at Verneuil, and made her first vows in 1951. She received her English degree in 1953.
She spent time in Westgate and Cambridge, then in 1951 she joined the Epinal community and stayed until 1968. She taught English and Latin and helped with religious education in both the convent and the local schools. She organised trips for her pupils, including one to Moscow where she distributed bibles to people she saw praying in the churches.
She made her final vows at Epinal on the 18th September 1956.
She spent 1968-9 in Notre Dame des Oiseaux at Michel-Ange.
From 1969 to 1990 she was part of the fraternity at Brunoy (56 rue de Montgeron), and taught English and Latin in the school and religious education in the convent and the local schools. She was headmistress from 1977 to 1990. Inspired by the spirit of Peter Fourier and Alix, she brought the school on in a remarkable way.
Enthusiasm for education summed up her vocation. As for her spiritual life, Jesus and Alix summed it up, as she used to say.
When she retired she taught English in the prison at Fleury Mérogis, and catechism, responsible for the Brunoy-Val d’Yerres sector and was in charge of sacramental and liturgical education in the diocese.
During the holidays, she loved spending time with the sisters at Megève, and that meant she was able to spend time with other friends. She was a party animal and shared blackcurrant liqueur all round.
She loved life, always responded to calls on her and would include other people in her active response. She was a lively person who shared her beliefs, and was always ready to move heaven and earth in order to help someone. In 2020, having spent several years in the Montjoie group, she was asked to join the Florida community. She found that hard after such an active life.
But thanks to the computer and the mobile phone, she was able to continue teaching some sisters in Vietnam and two Laotian students. These lessons were influential! Pascale Thérèse continued her vocation as educator and as confidante to friends who remain very grateful to her. She always followed world news and took part in community life. But latterly she had become tired and apt to hurt herself. Her last fracture caused her difficulty and to the surprise of everyone she died suddenly on 19th September 2022.
For her funeral mass the church of St. Pierre Fourier was packed. Everyone had a story to tell about her and above all they wanted to express gratitude to her.