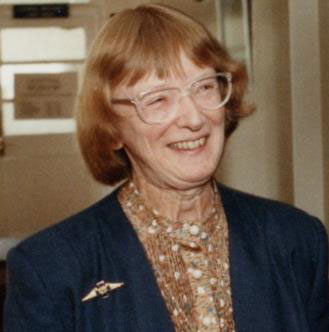 Kathleen was the eldest of three children and the only girl. She and her brothers enjoyed a happy childhood in a close-knit, Catholic family that was one of the mainstays of her life. Relationships with the expanding circle of nieces and nephews, as well as cousins and god-children, were a never-ending source of joy and interest.
In her early years, the family moved several times, and it was during her secondary schooldays in Yorkshire that she encountered the Congregation. She joined the noviciate in Rise straight from school, at the age of eighteen, and took the name Alexia. She made her vows two years later, in 1951. She taught in the school at Rise for a number of years and is still fondly remembered by some of her former pupils.
While still in her twenties, Alexia suffered a bout of rheumatic fever and this had a lasting effect on her health. Never robust, she nevertheless met succeeding challenges with determination: she always came up fighting after every accident or illness; it was one of her most striking, and admirable, characteristics.
She had a lively and enquiring mind and made up for her earlier lack of tertiary education by successfully gaining a BA Honours degree in Theology from the University of Hull, as a mature student. She built on this achievement some years later by doing an MA in the Psychology of Religion at Heythrop College, University of London. Her interests, however, were pastoral rather than academic, and always at the service of the Church.
By this time, she had left Rise, and had spent several years in Hull, where we also had sisters, working as a pastoral assistant in one of the parishes. During this time, she also did a course in communications at a Catholic radio and television centre near London. Then, in the early 1990s, she came south for good and found a new and very fruitful apostolate as a chaplain at RAF Wyton, near Huntingdon. This was a particularly happy and fulfilling period in a life which, up till then, had not always been plain sailing.
After retirement from the RAF, she remained in the area, in order to build on the many pastoral and social contacts she had made. She worked for ten years as a volunteer visitor for Victim Support and was an Auditor for the East Anglia Diocesan Tribunal. She also worked from home as a tutor for the Distance Learning-based Catholic Certificate in Religious Studies, continuing to read and mark essays conscientiously and with personal concern for each individual student until failing health made her reluctantly have to stop.
She maintained her independence, living in her small flat in St. Ives for as long as possible, enjoying visits to and from family, friends and religious sisters. Although living alone, she belonged to the nearby Cambridge community and spent most weekends there. She took part in Vicariate meetings and special events for as long as she could. In early 2015, however, residential care became unavoidable. She spent the last two years of her life in Coloma Court nursing home in West Wickham, to the south of London. Here, she received excellent care in a friendly Catholic environment. This last phase was of course difficult for her: reduced mobility, acute problems with hearing and communicating, and a progressive loss of memory and recognition. But she succeeded in endearing herself to all who looked after her, retaining to the last her pleasure in having visitors, her dry sense of humour, her frank enjoyment of ‘sweeties’ and her lovely smile. We shall all miss her.