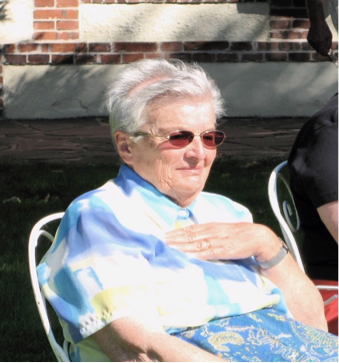 Odile was born in Paris into a family of 4 girls and 2 boys. After her primary education she went as a boarder to Brunoy in 1940, then followed a commercial course in Paris. In 1947 she entered at Verneuil, attracted by a life which included both monasticism and education. She made her first vows in 1949 and was sent to Brunoy. She took charge of the administration of the school for several years (400 pupils, 250 of whom were boarders), then having obtained a diploma in secretarial studies and office administration she taught book keeping and typing to about 50 young people in the area. She also worked in summer camps for young people, which she loved. But in 1967 the school signed a contract with the state and as she had no teaching diploma Sr. Odile became administrator of the school again, now grown to three times the size.

“This was not enough for me” she wrote, and feeling that her vocation was to be lived outside the convent, in 1970 she asked to train to work with local families, without letting on that she was a nun. “I didn’t want to be labelled, but I wanted to live my religious life in the world and to reveal the true face of an apostolic religious life through the way I lived. This immersion in the lives of local families where I tried to reveal the face of Christ lasted 17 years, and I gained a lot from it.” At that time she lived in a fraternity, first at Epinal sous Senart and then at Creteil with a sister who was a nurse. Her colleagues wanted to share in the sisters’ prayer. This created relationships which still endure; until recently a friend came every month from Brunoy to take her to Creteil to meet the little group established there. These same friends supported her while she was ill.

In 1981 she was invited by the Congregation to spend a sabbatical year in the south of Algeria. The desert and the spirituality of Charles de Foucauld marked her profoundly. When she was 60, in 1987, she joined in the foundation of an international house of hospitality established at Fontenay sous Bois. In 1997 she joined the Noviciate community in Paris, then at Brunoy. At the same time, she helped in an organisation which took in homeless people.

She joined too an organisation called “The Flame” founded by Sr. Thérèse Hurlin, which organised holidays in the Vosges for deprived children. As in 1949, her job was to organise the kitchen.

She spent from 2004 until 2007 in Rome in charge of the Italian community. Then she returned to Brunoy and joined a parish group which spent Mondays in a rundown area. They found her full of joy, attentive to everyone and a good listener. She then went to Viry Chatillon to help pack parcels for inmates in the prison at Fleury-Merogis. There she was appreciated for her discretion and simplicity. In 2014 she joined the community at Brunoy Florida. She continued going to her Monday meetings and to her friends at Creteil, more difficult now as she could no longer drive. She got more and more exhausted and her knees were giving her trouble, so she decided with her superiors to go to Quincy sous Senart to the Centre Desfontaines. She had visited sisters in the care home there over the years. She joined them in March 2019. Then she became ill and died on 18th December.