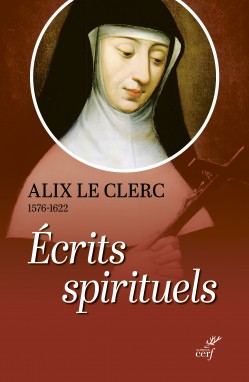 An eminent figure of French and feminine spirituality of the Grand Siècle, the mystic of Lorraine Alix Le Clerc is an adventurer of God.


In a time when religious life represented for women one of the rare possibilities of personal emancipation and self-realization outside the domestic home and the patriarchal order, the one who will become Mother Thérèse of Jesus gives herself the mission of girls' education. To this end, she founded an order of teachers, the Congrégation Notre-Dame, and began to create schools. Quickly exposed to the clergy and aristocracy of her time, she drew her spirit of resistance in a powerful interior life, and recorded her enthusiastic mystique in the writings which are gathered here for the first time and which participate in the creativity of the great French school of spirituality.


A testament to God's burning love.

Born in 1576 in Remiremont and died in 1622 in Nancy, Alix Le Clerc was beatified in 1947 by Pius XII. The Congregation of Notre-Dame that she founded is present today on the four continents.