Support priority projects of the Congregation.

These actions :
• promote the development of individuals or groups
• benefit the poor population
• try to bring lasting improvement
• develop the learning of autonomy
• create jobs for the laity

Education in the wake of the pandemic

The Congregation’s schools were closed for many months all around the world: in France and in Great Britain where many were lost to the virus, as well as in Congo or Vietnam, where the disease was more effectively controlled. In Brazil, schools which closed in March remain so as we enter 2021: pupils and teachers alike have greatly suffered from this lack of face-to-face contact.

The robustness of some Vicariates’ finances and of their projects has been severely tested by the crisis. The Sisters and their teams of co-workers showed great inventiveness and adaptability in reducing costs, generating new sources of income, and protecting as far as they could those staff left without income. And sometimes they had to take difficult decisions to maintain economic stability.

This crisis has also presented the Congregation with another opportunity to share its assets to finance the various modifications which needed to be made to sustain its schools.

Who will be the worst affected by this eclipse of their educational community? As ever, it will be the most vulnerable. Not all have had access to the internet or the IT equipment needed. Far from it.

Giving us another reason to continue to respond, wherever the Congregation finds itself, to the need for good quality education for all, rich and poor alike. 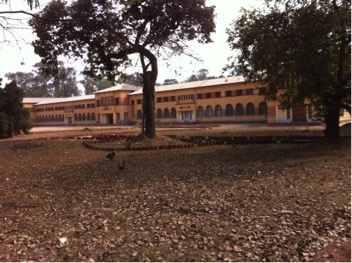 Originally called 80 years ago to the former Belgian Congo to educate the daughters of expatriates, the Sisters of Our Lady soon turned their attention in the XNUMXs to the needs of the local population: they built schools in the outskirts of Kolwezi, then in Lubumbashi, and set up communities in villages in the bush.

One building which has stood since the Congregation first settled in central Kolwezi is the impressive edifice of Notre-Dame de Lumière (photo above), built in the 1940s. It hosts several primary and secondary schools, a high school (lycée) and boarding house, some meeting rooms… and also the convent of one of the Communities of Sisters in Kolwezi. The building is subject to regular maintenance work, such as roof repairs. These last few years, cavities have appeared in the basement, creating cracks in the walls which first attracted the attention of the Sisters. The ground is disturbed and of course affected by the region’s ubiquitous metal mines.

In 2020 considerable underpinning work was carried out below the Boarding House of Mwanga Lycée. This project will continue in 2021 with similar urgent work below the convent building, to allow the entire block to remain functional over the coming decades.

at the new settlement in Kim Son – north Vietnam

The Sisters of the Vietnam Vicariate, today numbering 107, are divided into 15 Communities. They are constantly looking out for places where their apostolic work might call them. Their most recent settlement marked their return to the north which they were forced to leave in the 50s. Religious practice here is very traditional, and the messages of Vatican II are still news to many of the faithful.

There are three Sisters at Kim Son, where they were gifted a house. They started up various activities, including educating the village children: they would like to set up two classrooms where they can teach English, maths and music. And also add an upper floor with rooms for the Community.

Similarly to what they have done in the south, the Sisters of the Congregation of Our Lady would like to increase their work with autistic children whose families have no means or strategies to help them: the task of teaching them to speak and communicate requires highly specialised skills.

The school is asking for our support for the renovation and expansion of the sanitary facilities by bringing them to 6 units, separated for boys and girls and with access for children with disabilities. The wastewater circuit will also be renovated. 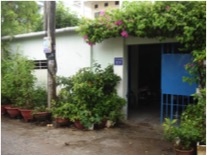 The Sisters of the Vicariate came to Rach Gia in 2016, at the Bishop’s invitation, to run a hostel for 15 students from distant villages in the south. In 2017 the Bishop sold the house to the Congregation for a good price to give them autonomy in managing the home.

There are currently XNUMX students. Apart from the hostel, the Sisters also teach catechesis in the parish, visit poor families and seek grants to help the children.

The Community has recently got involved in two projects: the Salesians have just invited them to collaborate in the education of children in their convent. At the same time, the Jesuits asked them to consider what might be done for the children of a neighbouring village who have no means of getting to school. In the Delta, transport between villages is done by boat or bike on the fer-boats The Sisters are preparing to house these children in their hostel to allow them to be educated at the Salesians’ convent. This is a huge challenge, as education figures very low in the list of priorities of people living on the Mekong: they live very much in the present, without dreams or plans, just taking to the water to fish, bringing their children with them.

The funding requested will be used to make the building more habitable and clean, as it floods in the rainy season: the floor will be raised above ground level, the yard will be resurfaced, water pipes renewed, and the roof made watertight…

Do you want to support these projects? Click here.