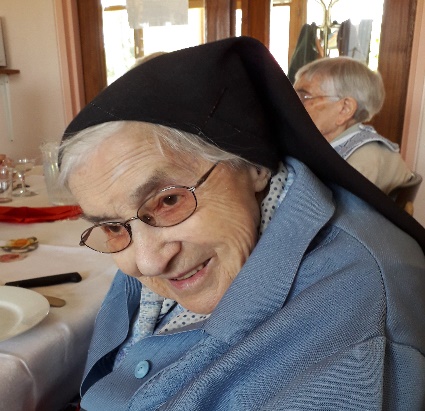 Manuela died peacefully on 30th April, aged 103. She was born at Zelina in Croatia on 19th February 1919, the youngest child of nine, many of whom died young. Her family was very affectionate, and she grew up in a deeply Christian atmosphere. Her father looked after the church and she did the same. She enjoyed cultural activities, singing, acting and dancing.
At 20 she became a postulant in the Congregation at Liège. It was wartime so she left for Portugal with the other novices. It was a hard journey, involving long marches. She often spoke about it.
She made both her first vows and her final Profession in Portugal, and stayed there 5 years. At the end of the war, the sisters returned to Belgium and she went to Dijon and worked in the school.
After the Council, in 1969, she taught catechism in the Parish and Croatian to the migrants in the Croatian mission, singing (she loved the Ward Method) and she prepared them for First Communion. She used to visit the families and translate texts into the Cyrillic alphabet. She travelled to England, Germany and Austria with groups of Croats.
In 2010 she went to Avermes with the community and 7 years later, in 2017, at 98, she left Avermes for Brunoy.
She was a born poet who loved nature, especially flowers. The flower garden energised her and she was always grateful for it.
She joined in the Office and in Community meetings until the end of her life.
We remember her faith, fidelity and prayer, her optimism and joy.