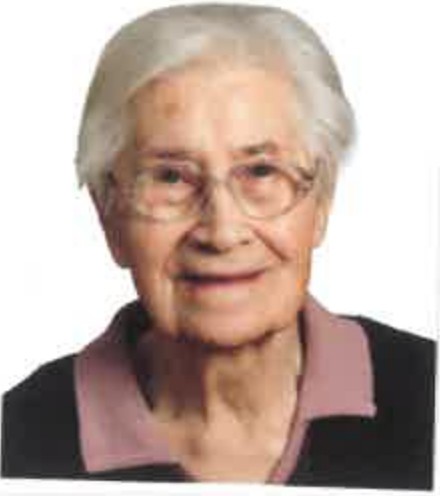 Sister Zita was born at Heidgau in Germany, on 3rd December 1919, the eldest of seven children. Her family soon moved to Weingarten, on the Franco-Swiss-Austrian border, and lived on a hill with a view extending as far as Lake Constance. Her father was a baker, and she loved serving in the shop.

As the political situation was unstable, and the existence of work camps known, it was common for young people to consider emigrating. So she was sent to Ubbergen in the Netherlands to learn French.

Her cousin Sr. Irmengarde had already entered at Jupille and spoke so warmly about her life there that Sr. Zita joined her on 18th March 1936. She made her first vows on 23rd August1938 and her final vows on 8th September 1940.

She was a gifted organiser and spent the first years at Liege and Leuven, then she went to Jupille and worked in several areas: sewing, cooking, the refectory, the accounts. She was precise and a perfectionist, with her native country’s sense of order and commitment to the job in hand.

She went on a course in Liege on family dynamics and that made her aware of the difficulties faced by many families. Following Vatican II she worked in a multicultural milieu at Droixhe, half way between Jupille and Liege, where a lot of Turkish families had made their home. The local council offered her a flat in a centre which had become a hub of peace, service and a resource to help with paperwork for new arrivals. Sr Zita helped to place children in school, obtaining the necessary forms for them. Young people would come to her for help with their homework and for conversational French. Young mothers valued her patience and kindness.

After these busy years she joined Sr. Goretti, a Sister of Mercy, to found a Focolare centre at Rotselaar, near Leuven. This spirituality inspired her.

In 2011 she joined the sisters from Waterloo at l’Olivier (Uccle). She adapted with great courage. We remember her passion for order and her penetrating voice. She lived her days in prayer, rest, activity and a daily evening walk.

We remember her elegant dress sense, her upright carriage, her uninhibited bursts of laughter, her delight when she heard her native language spoken in a film.

So often she would say “God’s will be done and not mine. I know He loves me.” She would say this over and over in the clinical emergency room, to the amazement of her doctor.

She found frequent periods in hospital deprived of visitors difficult. She came back to l’Olivier where her health declined and she died on 7th April 2021.

Her requiem was celebrated on 9th April in the chapel in the presence of the rest of the Community. She was cremated and her ashes were scattered in the cemetery at Waterloo as she wished.