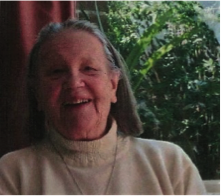 Such a Way, as gives us breath:

Such a Truth, as ends all strife:

Such a Life, as killeth death.”

The Call by George Herbert

Mary Bridget Tryphena Evans (known to us as Sr St Paul or Paul, and to her family as Biddy) was born on 21st February 1919, in Sidmouth, Devon. She was the youngest of 5 children. Her father was an engineer, returning to this career after service in the Army.

Bridget was baptised in the Church of England, and in 1932 was sent as a boarder to a school for officers’ daughters at Twickenham. From there she gained entrance to Newnham College, Cambridge to read Classics. While an undergraduate, she became interested in Catholicism, and was at some point introduced to the sisters of the Congregation of Our Lady. At that time they ran a house for women University Students called Lady Margaret House in Grange Road. Eventually she underwent instruction from Sr Veronica Balfour, and was received in to the church during the summer of 1940.

It being wartime, Bridget was recruited into an organisation concerned with intercepting enemy messages, in order to decode them. We now know this as Bletchley Park, the home of the famous Enigma Code. She was (in her own words) « one of the large staff of auxiliary personnel who dealt with registering and processing the material which poured in for decoding. » Many years later she once admitted working in the next hut to where the Enigma work was done, though she did not know it at the time.

In1944, freed from war work (with the help of a Member of Parliament) she entered the Congregation of Our Lady. The sisters had taken refuge from the bombing, by evacuating to a large country house at Millichope Park, Shropshire. When the war in Europe ended later in the year, the community returned to Westgate-on-Sea, Kent where their monastery had fortunately remained intact.

After her clothing ceremony the following year Sr St Paul began Canonical Studies, including Liturgy and Theology, where she was much helped by her knowledge of Latin. Next came Temporary Profession in 1946, bringing with it various teaching duties in the school.

Early in 1950 a new house for University Students was opened in London at 53, Cromwell Rd. It was announced that Mother Veronica was to become the chief « foundation stone », and that Bridget (now known as Mother St Paul) would succeed her as Headmistress at Les Oiseaux, Westgate. The thought appalled her at the time, since Mother Veronica was greatly esteemed by both pupils and parents. She did not see herself as in any way being her equal. But in those days there was no consultation; you were told, and you DID IT!

However, she remained in that capacity for 15 years and certainly earned her place as

a much loved and revered Headmistress. More responsibility was to come.

In 1965, Sr St Paul was sent to Cambridge, as Superior. This was a time of uncertainty and renewal in the Church, as it sought to absorb and put into effect the teaching of the Vatican Council. There was much discussion and lively debate among the students, who looked to the Religious for leadership and clarification.

Then Sr St Paul had another shock! She was to become Vicar! In that role, she attended the Chapter at Berlaymont in 1966 followed by a visit to Rome. It proved to be a steep learning curve, with many new ideas and a new language being circulated. Then came another Chapter in 1969. The Vicariate system was still somewhat new in England, with the Vicar just an appointee of the Generalate, and not elected, with a stated length of mandate. Paul remained Vicar for 9 years.

In the early 1970’s she was appointed as Superior at St Leonards, but on eventually relinquishing the post of Vicar, Paul went to More House Hostel in London to become the warden and a chaplain to the University students. This was a really enjoyable apostolate, since the students were very responsive, and from the point of view of religion, seemed to value the place and mode of life.

In 1980 the Vicariate opened a house in Wandsworth, and Paul was asked {note the change!) to go there to be part of the small community.

While there, she had a most unexpected and bizarre apostolate, where through the connection with Sr Winefride, one of her community who was working as assistant to prison officers in Wandsworth Prison, Paul obtained a post teaching the men – many of whom were wholly or semi- illiterate. No religious teaching was allowed, but the inmates seemed to enjoy learning to read and write, responding well to her classes which helped to restore their morale and self-esteem.

Then in 1984, a re-organisation of the Vicariate meant that Wandsworth had to close. So Sr. St Paul was given a choice {again note how things had changed) and opted to go to Rise Hall, our school in Yorkshire. There she helped by doing all sorts of odd jobs, including being driver of the minibus, a collecting and delivering day-girls to and from the surrounding area.

The school had a high academic standard and good reputation but was too small to survive. It was impossible to keep the big house going as it was in need of a great deal of repair and so the community split up, with Paul and others re-located to a house in Bridlington. Here, one of their duties, amongst many, many others, was to translate the wealth of documents which the Generalate in France sent on a very regular basis. Paul considered herself only an amateur compared with her two companions, Srs Geraldine and Emma, who were ‘licenciées’, for she had only began learning French at the age of 51!

Finally, in May 2011, along with Srs. Gerry and Emma, Paul transferred to St Leonards. There the problems of increasing age and frailty could be better met by the devoted care of the nurses and other helpers. Sr St Paul was well enough in February 2019 to enjoy her 100th birthday celebrations, but eventually she became weaker, and joyfully and peacefully returned to her maker on November 7th.

May she rest in Peace.