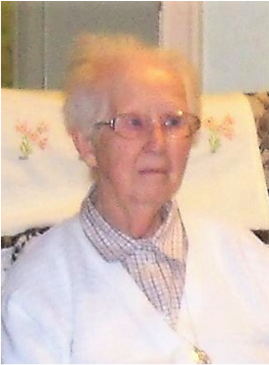 Josephine Anne Tuckwell was born in the village of Papworth Everard near Cambridge on June 12th 1930. Her parents had met when her father was being treated in a local sanatoriuml and her mother, a nurse, was looking after him. Josephine was their only, much loved, child. She was educated locally and did a degree in languages at Newnham College, Cambridge, where she first encountered the Congregation. After graduating, she taught French and Spanish in an Ursuline school in Brentwood, Essex.

In 1956, she entered at Westgate on Sea, Kent and taught French at Les Oiseaux. She made her first profession in 1959 and final one in 1962. She then joined the recently established community at Trinity College, Nabbingo, in Uganda and stayed there until forced to leave in 1974, with the other European sisters expelled by Idi Amin. During these twelve years, she taught in the school and, with Sr. Joyce, was an examiner for the Cambridge Overseas Examination Board. She was in charge of the Young Christian Students and used to take some of our girls to debates with the boys in a neighbouring school – visits anticipated with great excitement. She also organised film shows; both children and sisters have vivid memories of sitting outside in the evening to watch them while being ‘eaten alive’ by mosquitos!

In 1975, after her return to England, she went to St Leonards to teach French and Spanish. She was an excellent and dedicated teacher and spent hours ‘burning the midnight oil’ preparing lesson sheets just in time for the next day. Famous for being late for everything, she was always in an apparently disorganised rush, but what she produced was always well focussed and thorough.

She also trained as a simultaneous translator, and became a familiar presence at international meetings of the Congregation, translating with ease and efficiency. Her expertise became widely known and she was invited by a number of other Congregations to attend their Chapters and suchlike meetings. On one occasion, she visited Brazil for a meeting of the Congregation’s Justice Commission (having added Portuguese to her repertoire); she was immediately ‘at home’ with our Latin American communities. She was a friendly, outgoing, lively person, with a marked sense of humour, especially delighting in puns and other word play.

When the school at St Leonards closed in 1992, she remained in the community there and devoted her energies to supporting campaigns for social justice, environmental change and international development, collecting information (her room was nearly impenetrable with piles of books and papers) and writing letters to newspapers and Members of Parliament. She had decided views to which she stuck tenaciously. She was also passionately committed to ecumenism, becoming a member of Churches Together in Hastings and St Leonards. She was an active member of the local parish of St Thomas of Canterbury where she was a Reader and a Eucharistic Minister and where she made many friends.

As she became older and frailer, mobility became a problem and eventually she moved to Bryher Court Nursing Home, just across the road from Filsham Lodge, where she was well looked after for the last three years of her life: the staff often said that it was ‘a privilege to nurse her.’ Sisters visited and gave her Communion almost every day and she settled into a contented but increasingly passive existence. Towards the end, communication became difficult, though the smile remained. She died, peacefully, very early on October 3rd. Her Requiem Mass was held on October 25th in the church she had served so devotedly and she was buried with our other sisters in the cemetery at Hastings.