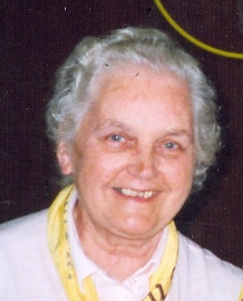 Geraldine Mary Hall was born in Felixstowe, Suffolk, on June 11th, 1928.  At the age of 5 she went to the local boarding school of the Jesus and Mary Convent, since her parents were often abroad, but in 1939 she came to the Convent of Our Lady at St Leonards to be nearer her brother who was in the Chest Hospital down the road, being treated for TB.

After leaving school Geraldine went to Oxford, where she read French and Latin at St Anne’s College. She grew to be a highly talented person – but never advertised the fact. She read and wrote fluently, could sing, and played both piano and harmonium. Rambling in the countryside gave her much enjoyment and in later years she became deeply interested in machines – anything mechanical – but especially cars, which she loved driving… (rather fast!!)

She was also a wonderful “family” person, often looking after her nieces and nephews, who even today remember with affection the fun and joy they experienced whenever she spent time with them.

In 1950 Geraldine entered the Congregation at Westgate. She was known there as Mary St Dominic. She was soon transferred to St Leonards becoming headmistress of the school in 1954. In 1959 she went to head the school at More House in London.

Her fluency in French soon saw her as an invaluable member of the Vicariate translation team, working through all the official letters and documents arriving from the Generalate in Rome or Paris. In later years this led on to becoming a member of the Archives team, which often involved travelling abroad to meetings connected with the history of the Congregation. She also developed a great love of Church Liturgy, which proved a wonderful outlet for her musical talents and resulted in many well-planned liturgical celebrations for both school pupils and her religious Communities over the years. 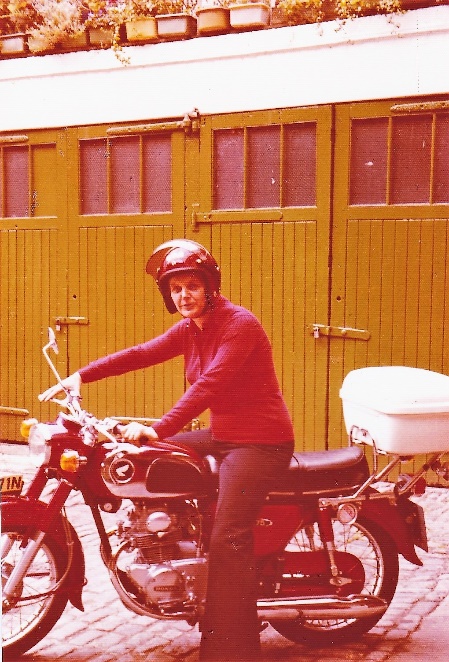 While in London she became Warden at More House and she also acted as a University Chaplain for Catholic Students. In the early 70’s she became Vicar of the English vicariate – a post to which she was elected twice (1975-1981 and 1990-1996). This meant more travelling to make regular visits to each of our houses in the Vicariate. She happily drove most of the time, but it was not unusual to see her arrive on her motorbike, clad in helmet and black leathers – much to the horror of some older members of the Community.

There were many official journeys abroad. On one occasion she went out to Africa to bring home Sr Frances du Bus de Warnaffe who had been taken seriously ill with a stroke while working for the World Association of Girl Guides and Girl Scouts in Nigeria. Then she helped Frances with her rehabilitation, with determined patience and love.

In 1981 – (by this time she had reverted to her baptismal name of Geraldine – popularly known as Gerry) – she moved to Rise Hall in Yorkshire, once again becoming headmistress of our boarding school. Eventually in 1989 Rise School closed, and the Community split into 2 smaller groups. Sr Gerry ended up at Bridlington, leading the little community there 1996-2011.

Throughout her years as headmistress, she often organised trips abroad, taking groups of students around Ireland, Scotland (including Skye). France and several times to Scandinavia. She was often accompanied by one or other of her nieces, one as a co-driver, and another as the group nurse. While continuing her valuable work as translator she was able to indulge herself in her love of things mechanical, building up a wonderful collection of tools and gadgets. There are many stories of how Gerry was able, (even when she wore a habit with its two deep pockets) … to produce a useful screwdriver or pair of pliers to do emergency repairs. While at Bridlington, she became an active member of the Stroke Association.

Finally, in 2011 the Bridlington Community moved to St Leonards. Srs Gerry, Emma and Paul thereby swelling the ranks at Filsham Lodge. As the latter approached her 100th birthday she grew more frail, and Sr Gerry did everything possible to make her comfortable, to pray and to read to her, and to share their love of crosswords. But after her own beloved sister Moy died (also aged 100), and Sr St Paul passed to her heavenly reward (a few months after becoming 100) Sr Gerry herself went into decline, needing more nursing input as she became more frail.

Gerry was always very positive in outlook, generous, thoughtful, and kind. She was a driving force, full of energy and helpful ideas. Highly popular wherever she went she made many friends with whom she kept in contact right to the end. She never missed a Rise School Old Girls’ Meeting if she could help it, driving from Sussex to Yorkshire several times a year, until eventually driving such a distance was no longer possible.

Memories keep flooding in, but we have to stop sometime!

She will be missed by so many people.

May she rest in peace.