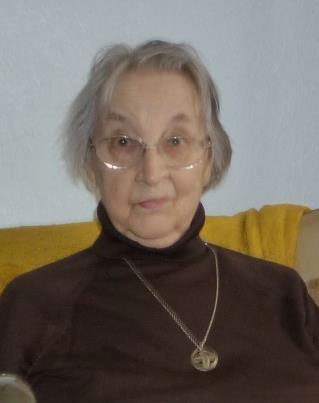 Elizabeth was born in Canterbury on October 18th 1927, a few minutes after her only sibling, her non-identical twin sister Kathleen. The girls grew up in a loving, actively Christian Anglican family. In 1940, during the Second World War, the family was evacuated to a safer part of the country where the girls continued their education at a school run by Anglican nuns. After the war, in 1945, they went to live in Westgate, since their house in Canterbury had been badly bomb-damaged. Although not yet officially qualified, Betty (as she was known in the family) taught in several small private schools in the area and came into contact with our sisters. On her 19th birthday, October 18th 1946, she was received into the Catholic Church and on September 15th 1948 she entered the noviciate at Westgate, taking the name of Catherine. She made her first profession on October 2nd 1950.

In 1954 she was sent to Cambridge to read Natural Sciences at the University. She gained a First Class degree in 1957. She then returned to Westgate to put the teaching of science on a more professional basis which included setting up the laboratories for physics, chemistry and biology. She found this, on top of many other responsibilities, hard going and her health broke down. The following years found her in Cambridge, Rome (for six months), St Leonards and Rise, contributing in various ways to community and school life, always accompanied by the small dogs who had been essential to her well-being ever since the time of her illness.
Finally, in 1982, she settled in Beverley, in a small flat which provided both independence and warden care (chronic neuropathy, bravely borne over many years, led to increasing problems with mobility). In Beverley, she devoted herself to working for the local parish in various ways. She also trained as a counsellor and was a founder-member of the Humberside Association of Counselling. For a while she worked with the Hull Samaritans. She was instrumental in the creation of a flourishing group of Associates. She learned to drive and so was able to spend time regularly with our communities in Leven and Bridlington until those houses closed.

For as long as she could manage to travel, Cathy participated in Vicariate meetings. She took a keen interest in what was happening in the wider Congregation and this continued even when she became virtually house-bound. She remained cheerful, occupying herself mainly with an impressive amount of reading. Finally, in the autumn of 2017, declining health and increasing memory loss made living alone no longer viable. She celebrated her 90th birthday in a care home in Beverley, spent a few months at St Leonards, then moved in January 2018 to Cedar Court, a care home in Surrey where she could more easily be visited by her beloved nephew Roy and his family. It was here that she died, unexpectedly, of heart failure in the morning of April 11th. Her Requiem took place in the Catholic church in Cranleigh, with a moving homily by Roy (who is rector of the nearby Anglican church). Her ashes will be interred in her parents’ grave in St Leonards on August 19th.
Never easy to live with, Cathy was however a person of great warmth and generosity. She was a scientist in love with the natural wonders of creation, a talented musician with (in earlier years) a beautiful singing voice, and a great facility for writing (at one time she edited a much appreciated Vicariate review, and wrote an excellent brief history of the Congregation up to the time of the 4th Centenary).
May she rest in peace.