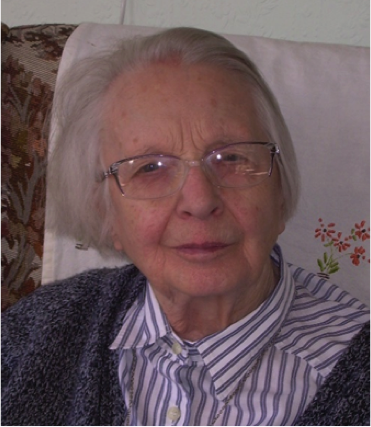 Dorothy Mary Frances Pritchard (Sister Magdalen) was born in Hatfield, Hertfordshire, on September 28th 1923, the youngest of five children in a loving Anglican family, with one brother and four sisters. Her father was private secretary to Lord Salisbury, and the family lived in one of the lodges attached to the estate. Sadly, her father, whom she loved dearly, died suddenly when she was only 12. The tragedy did, however, enable her – a bookish child – to have a full grammar school education, since her father’s embargo on girls receiving further education was now lifted.

She was a keen Girl Guide and, when old enough, ran a Brownie pack, together with a friend. When war broke out in 1939, she helped look after evacuees from London’s East End, although that part of Hertfordshire experienced air raids too. She then moved to Dulverton in Somerset, where her first job was to look after the children of Lady Backhouse, a Catholic. Here, through a friend of the Backhouse family, Sr. Alix Binyon, she first encountered the Congregation (the school at St Leonards had been evacuated to nearby Hollam). She was received into the Church there on March 9th 1945.

After the war, she went to St Leonards where she recognised her calling to religious life. She entered at Westgate on Sea, Kent in 1948 and spent two years there. She made her first vows in 1950 and returned to St Leonards before being sent to the Maria Assumpta Training College in London, during which time she lived in More House. She returned to St Leonards for her final profession in 1953 and then was sent, as a qualified teacher, to Flint, North Wales, where she was one of the foundation stones of a new little community working in the local Catholic school, a pioneering apostolate for us at that time. She taught Mathematics, Religious Instruction and (for the girls, for the school was mixed) needlework. She also became involved again with the Guides.

After 17 years in Flint, she was offered a sabbatical break and chose to follow a Social Work course at Sheffield University. On its completion, she took up a post in the (poorer) east end of the city. This too was breaking new apostolic ground. She and Sr. Fabienne Horrell (a primary school teacher) formed a small fraternity in Sheffield. Soon, Magdalen became part of a newly created Training Team, with special responsibility for postgraduate trainee social workers in different areas of the city. She worked with a youth scheme for non-academic boys and girls who left school at 16 with no jobs and was also a founder-member of a Christian Unemployment Group (CHUG) which helped to make the local churches more aware of the causes of adult unemployment. She also joined the Diocesan Vocations Team – the first to include priests, religious sisters and lay people. Both she and Fabienne were active in their local parish, and it was through them that GB had its first two Associates.

The failing health of Sr Fabienne necessitated the closure, in 1993, of the Sheffield house. When they left, both sisters received an illuminated scroll as a tribute to their work in the city during the previous two decades. After a few months in Walthamstow, East London, Magdalen went to Rise, in Yorkshire, where she stayed until the sisters left in 1997. She then went to Leven, not far from Rise, where her practical and organisational gifts were at the service of another new small community with local outreach. When Leven closed in 2006, she returned to St Leonards, living in Alix Lodge, helping in whatever way she could and enjoying the beauty of the garden and its wildlife.

Increasing fragility meant that eventually she had to be nursed in a specialist unit some distance away, where three difficult years of progressive dementia ended quietly in the early hours of October 20th, a few weeks after her 96th birthday. Her funeral took place at St Leonards on November 5th and several of her nieces and nephews joined the community in saying our earthly farewell.