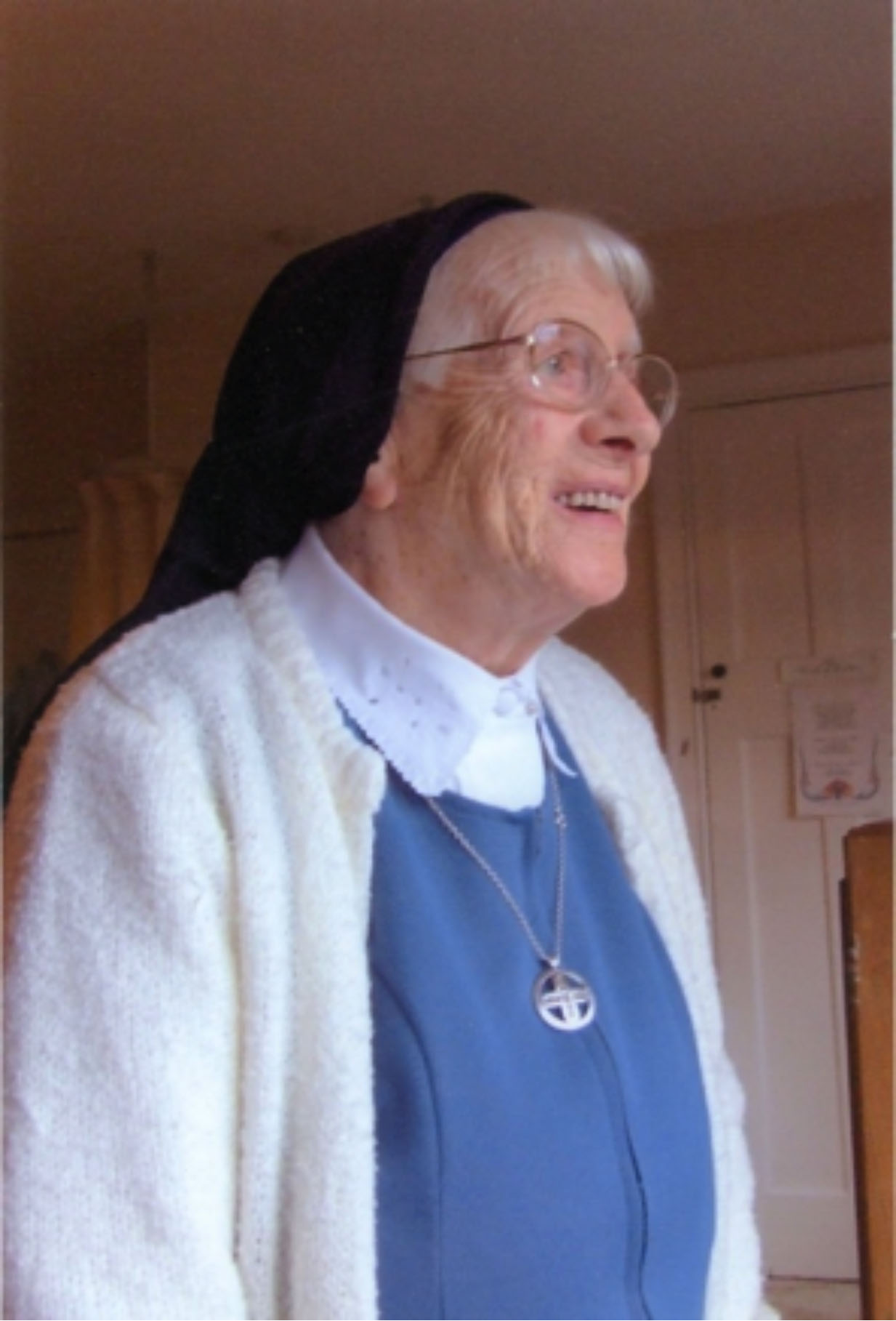 Sr. Michael was born in 1916 in Galway in the beautiful West of Ireland. She grew up happily on the small family farm, the ninth of eleven children (four girls and seven boys). Her mother was a fervent Catholic and the rosary was said at home every day. The nearest church was nearly four kilometres away and the family walked there in all weathers. The primary school was next door to the church and here Julia began her education; what she liked best, she recalled, were the recreations! She then went on to the senior school, run by Presentation Sisters. In the early 1930s some Canonesses from Westgate came to talk about our kind of religious life and Julia felt called. She left Ireland for Westgate in 1935, making her profession two years later. Her main work was in the infirmary, and care for the sick and frail was always one of her special loves.
During the Second World War, the school and community were evacuated from the dangerous south coast of England to safer places. On returning to Westgate in 1945, Sr. Michael continued to work in the infirmary but also helped with the cleaning and the children’s refectory, all tasks which she found rewarding, especially when they involved the children. In 1954 she went to More House, to take charge of the children’s refectory (we had a day-school at that time) and to work with the au pairs. With the latter she always had a great rapport and at least one, from a later period, remained in touch with her until the end.
In 1960 she moved to St Leonards, where she remained for the rest of her long life, working mainly in the kitchen and refectory. When the school closed in 1992, she found new opportunities to visit elderly and sick residents in several local nursing homes, where she became a well-known and much-loved personality. When, well into her 90s, she was asked what she liked doing most, she replied “Taking Holy Communion to the old folk”!
She remained in close and loving contact with her extensive family, paying frequent visits to members still in Ireland as well as those who had settled in the USA. Through her friendship with Lucy Fernandes, whom she had taken under her wing when Lucy first came to work and live with us at St Leonards, she even went to India and helped set up a charity.
In 2016 she celebrated her 100th birthday and was delighted to receive a card from the Queen. By then, she was very frail, but was able to stay in the community, thanks to the excellent care of the various agency nurses who provide ‘Care at Home’ for all the sisters. She died peacefully on October 18th, two weeks after her 101st birthday. Many sisters, friends and family came for her funeral on November 3rd. It was a moment to recall her many qualities: her love for children and the sick, her gaiety and enjoyment of a good party (with Irish dancing), her radiant, mischievous smile, her devotion to prayer and to Our Lady, and the warmth of her welcome to visitors: ‘a stranger is a friend you haven’t yet met’ was one of her favourite sayings. May she be welcomed in her turn into the joys of eternal life.