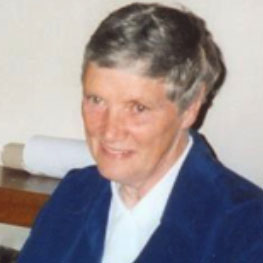 Eleanor was born in Rochdale. In the north of England and was an only child. She had a Catholic upbringing and trained as a teacher in a college run by the Sisters of Mercy in Hull. Feeling called to religious life, she joined this Congregation at the age of 18 and taught in several of their junior schools. Her artistic gifts were soon recognised and in 1959 she was sent to the Central College of Art and Design in London, where she obtained her Diploma. On returning to Yorkshire in 1962, she was sent as personal assistant and driver to the local Bishop of Middlesborough. It was on one of the Bishop’s visits to our retired Sisters in Hull, that Eleanor first met our Congregation.
When the bishop died, some ten years later, the new bishop dispensed with her services and Eleanor was out of a job. She had, in any case, become unsure of her place with the Sisters of Mercy from whom she then separated. She maintained her religious commitment, however,
and continued to live by her vows. As it happened, our school at Rise, near Hull, needed an art teacher and so she was employed as Head of Art and Religious Education. She taught at Rise with outstanding success until the school closed in 1989. During this time, she also completed two degrees in Art from the Open University and a Diploma of Higher Education.

After leaving Rise, she taught art to the boys at St Augustine’s College in Westgate (where the Benedictines had taken over our buildings) while living with our sisters in nearby Ramsgate. It was now that she asked to join the Congregation. She was accepted, despite some hesitation due to her idiosyncratic ideas about religious life and her marked preference for Benedictine spirituality. She made her profession in November 1992.

When the Benedictines closed their school in 1995, Eleanor moved to London and taught art in a school for boys belonging to the Sikh Community in Chgwell, where she became a popular and respected member of staff. Eventually she left the Sikhs and, in 1999, was invited by the Sisters of the Sacred Hearts of Jesus and Mary, with whom she had stayed in Chigwell, to teach art in a new school they were opening in Zambia. She threw herself into this venture with enthusiasm and success but, after only nine months, she became seriously ill and was flown back to London.
After a long convalescence, she rejoined the Ramsgate community before returning to Yorkshire and joining the small community in Bridlington. When this little group moved south to St Leonards, Eleanor found accommodation with the Benedictine Sisters of Grace and Compassion near Heathfield, not very far away. She always considered this to be a temporary stage and eventually, in January 2016, she was able to move in her turn to St Leonards. By this time, however, her health, both physical and mental, was deteriorating and a year later she needed specialist care, first in a residential facility attached to Hastings Hospital and then, for her last few weeks, in a small nursing home where she died quietly on 20th July. Her funeral took place on 17th August, conducted by the Benedictine Abbot whom, many years before, she had helped to become a Catholic.

Although never able to settle into predictable routines, Eleanor was much loved wherever she went for her warmth, kindness, generosity and sense of humour. A ‘zeal for education’ in and through art was the outward expression of her experience and love of God. After the via dolorosa of her final months, may she rest in peace.