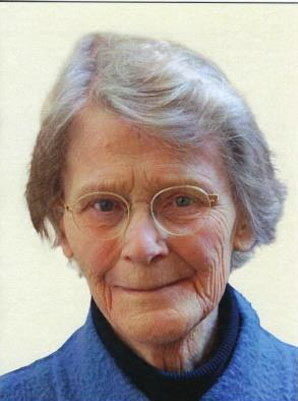 Annette was born on the 29th March 1932 to a wise and liberal family, free as a child to play and socialise with villagers from all backgrounds. She grew into a balanced and positive adult. When the war came, her family was separated, her father had to go into hiding, her mother was taken to a concentration camp in Vught, and she and her siblings were dispersed, causing them fear and distress. However, this experience drew them closer together. The faith and trust in God she inherited from her parents gave her a sense of security which may have influenced her choice of the religious life.

In 1953 she entered at Verneuil, where she had studied in her final year at school. Her novice mistress was M.M. de l’Annonciation, a woman gifted with wisdom and humanity.

The novices studied the Old and New Testaments, the Constitutions, and Gregorian Chant with Sr. Isabelle-Marie Brault.

She spent her Apostolic Year at Vught, made her temporary vows in 1956 and left for the Scholasticate in Paris, where Sr. Madeleleine-Marie Foulon was in charge. There she studied French Literature at the Sorbonne and followed a course in ‘Catholic Doctrine for Religious’ at the Institut Catholique and the Gregorian Institute.

She qualified as a French teacher and in 1958 went to Vught. In 1959 she made her final vows. She studied theology at Niymegen and found it more relaxed than the course in Paris.

In 1966 she was a delegate at the first Chapter after the Fusion of the Roman Union and the Union de Jupille.

In 1967 She became headmistress, however in 1971 the boarding school had to be closed. She found Ellen Baake, one of the teachers, a great help.

In 1971 she was elected Vicar of Holland, and oversaw the move of the Regina Coeli community to Alix le Clerc 1.

She took up theology again but had to look after a sick sister-in-law so was unable to finish her doctoral thesis. She also helped Sr. Christine Hachez to organise a group of sisters from Belgium, Holland and Switzerland trying to establish foundations at Sion and Lens.

In 1977 the house she was in had to be closed owing to the declining health of the older members of the community, and Sr. Elisabeth Giron encouraged her to set up house with Ellen Baake.

In 1979 she stayed with Sr. Anne-Marie Ahsmann in San Ysidro, California and with her visited the sisters in Mexicali and Chiapas.

In 1983 she was taken into hospital, with what turned out to be the beginning of the Menières disease which affected her hearing from then on.

In 1991 she became part of the administrative body of the Language Lab at Regina Coeli, a task she undertook with enthusiasm.

In 1997 Vicariates which had become too small were renamed Groups. Although she understood the reasons for this, she regretted the loss of more frequent contacts with the General Council and the other Vicars. This was also the year when her non-Hodgkins lymphoma began. This necessitated long – and happily successful – sessions of chemotherapy and radiotherapy. Ellen was an invaluable support, and undertook a lot of the responsibility of the community.

As they had become so few, Annette concentrated on finding accommodation for the remaining sisters so that they could live together. Ellen took over more and more of the administration.

In 2017, Annette’s book “The History of the Nnuns of Vught” was published. Her non Hodgkins lymphoma returned, but she went into temporary remission. She died on 7th August 2019.

Looking back at her life, she felt filled with wonder and gratitude.

Annette’s deteriorating health and deafness led to her having to give up cycling and gardening, and even water colour painting which she enjoyed so much.

In 2019 her non Hodgkins lymphoma came back. She was taken into a hospice (she was its first patient) and showed a great deal of courage, remarking that she was curious to see what came next. “I am in God” she said, and pointing at each person there, she added “God is in you, and in you, He is all around us.”

She died on the 7th August.

Her funeral Mass had as its theme “Wherever friendship and love are to be found, there is God.